Browse: Home / The bear of Ehmej

In Lebanon, the names of many towns and villages are associated with the nickname “bear,” for instance Kfardebian, Bekaakafra – hometown of Charbel, a renowned saint in Lebanon and Ehmej.

The question of why this nickname is given to the mentioned villages and others is raised. The simplest of all the numerous answers and explanations is that bears used to occupy the forests surrounding these towns and villages.

However, the story we inherited from our ancestors in Ehmej is quite different.

The Prince Youssef Ash-Shahaby used to hold celebrations, on March 19 of every year, on the occasionof Saint Joseph’s day, his patron saint. A large number of the villages’ residentsvisited the Prince’s palace to congratulate him. Each village offered particular folkloric and traditional acts in which bears took part; one village presented a dancing bear,another played with a sword, while a third village presented a bear walking on a roller…

On the other hand, Ehmej offered, on Prince Youssef’s day, a reading bear!! How did that happen?

The bear of Ehmej stood behind the podium on which was the book of Maronite liturgical prayers written by hand on thick dark brown paper. The bear of Ehmej started turning over the pages of the book using his tongue, humming and emitting an intermittent sound. Then he had rested for a second before he returned to flipping the pages of the book again, page after page, and continued to hum and make that sound. In fact, it was because the bear’s trainer had put between each and every paper, a few grains of raisins that the bear enjoyed eating. Therefore, the bear was flipping the papers in search of these delightful grains.

-What is this bear doing?!

– He’s reading the synaxarion your highness, replied the bear’s trainer, a villager from Ehmej.

– And what is he saying?

-Your highness, the texts in this book are in Syriac, and our bear reads Syriac.

It is from this story that the famous expression has originated: “all the bears danced except for the bear of Ehmej.” Yes, the bear of Ehmej didn’t dance, and nobody could have made him dance either, but he read. He was an educated and civilized bear.

On the basis of this traditional story, religious and civil institutions in Ehmej adopted the drawing of a bear wearing glasses on his smooth nose and reading, on the head of their letters and publications circulating in the town and outside it. 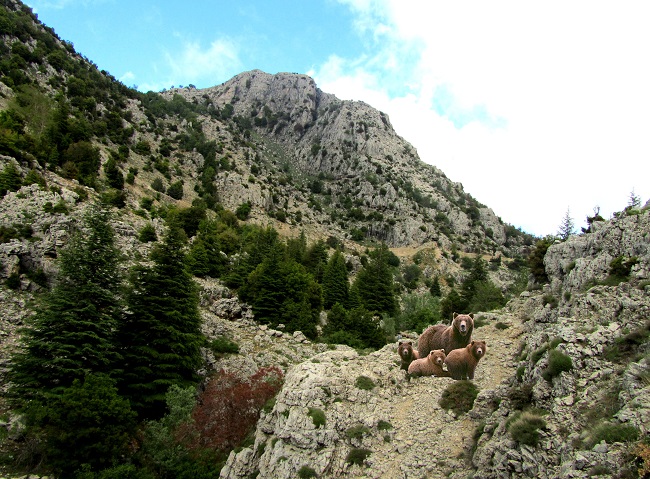